Giants Diary: Of Losing Their Lee to Falleth off Cliff 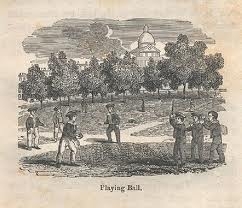 Having just scanned a scathing review from a disgruntled commenter of a certain MLB blogger with a cowboy hat regarding poor quality Queen"s English usage, I will try my best not to use such diction but keeping in mind we kicked Pommie patootie back in the late 1770s, so we claim winner's rights to some artistic latitude.

The Orange and Black hosted the team from Philadelphia, the city that finally regained some esteem from the baseball gods. 'From what?' you might ask; from threatening the life of their very own Wild Thang. (Oops! Reflexive pronoun; oh the agony!) For the tiny little boo-boo of blowing the World Series, his career was sent a-plummeting. For their collective poor sportsmanship after their 1993 display, Philadelphia was banished to obscurity, if not totally ensconced in the cellar.

But it really was the manager’s fault because he had poor gut instinct. It should have become obvious to him that the Wild Thang (there I go again) wasn’t cutting it. At that point, he should have tossed the playbook in the trash and trod out another reliever or called upon one of the starters to close out the World Series. But nooo, he had to go with the guy that got them there.

That is what makes Bruce Bochy the terrific manager that he is. He knows when it’s time to shake things up. Even if it means removing the straw that had previously stirred the earlier drink, except of course, for last night.

Though after a six-game winning streak, the Giants were statistically due to have their lee blow off the cliff. Here might have been a good spot to insert the theme from the Good, the Bad, and the Cursed-Wa-Wa; even Lee Van Cleef probably couldn’t have saved them from the wrath of the right honorable Mr Cliff Lee.

But at least Pence is finally getting going. And (to ruffled brows of the English commenter) he further proves what surely must be the undeniable theory about players who, when facing their former teams, develop super powers, bedeviling their baseball alma maters with ten times the ferocity of a woman scorned.