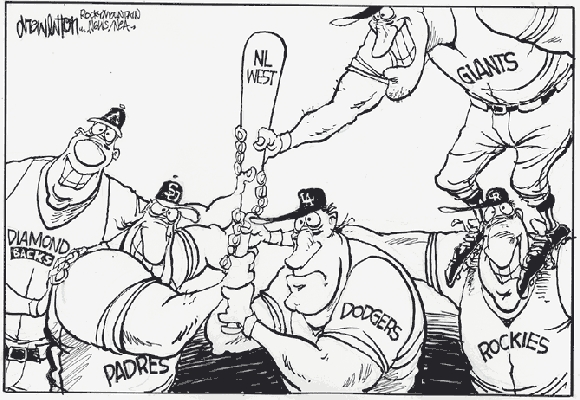 At least the Giants were able to start the so-called second half of the 2013 baseball season with an uplifting two-out-of-three victories over the Snakes of Az.

Then along comes the personage of Bronson Arroyo to spoil things.

Tim Lincecum held true to the statistical evidence by stinking up the mound like most all pitchers do while experiencing a post no-hitter hangover.

Timmay was stoic through all and took the loss in stride. Why should he worry? After all is said and done, the chances are 99:1 that he’ll still be a millionaire and you won’t be, so there. The Giants players may just have to console themselves with boatloads of money from swelled contracts, even in the face of their sinking pennant prospects. Money for nothing, chix for free, or is it checks? They’ll still get to dine with Obama, and -- that’s right -- you won’t be.

As for Giants fans, it ain’t over yet. Jeff Francoeur is due. He is sure to tear up the league for treating him so disrespectfully. Francoeur will rule the majors in slugging for the second half of the 2013 baseball season for his moving swan song. Kensuke Tanaka will triumph over the tender mercies of the Giants' tectonic shift in baseball fortunes bestowed upon them by the baseball gods, who will be looking down upon a struggling Orange and Black, wallowing in abject mediocrity, and may be heard to express their derisive merriment in shrill mocking tones of timbre.

As soon as you can say "last minute trade deadline" three times quickly, the team may yet arise from the ashes of their pitiful play to hitherto again elicit and excite the sport’s titular tendencies for their tenacity in enduring the hardships of their tormentors’ torture that is the Giants 2013 season.

And amidst the terrible tides of venomous opponents, tantamount to disrupting the tidal waves of taunts from the opposition and the tin cup wielding pundits, the Giants will rally all the way-back, as Sherman would opine, to win the NL West title for King Street and Country and County of San Francisco.