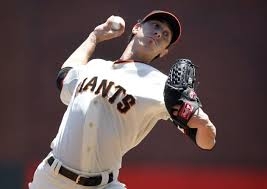 The Atlanta Braves were victims of a blue moon performance on Sunday by that slowpoke Timmy Lincecum.

The dismantling of the National League's Eastern Division leaders provides further proof that the Giants are up to defending their World Series Championship crown.

With a barrage of home runs and torrid hitting, the orange-and-black, by virtue of the three-out-of-four-game rout of the Braves, find themselves holding on to a tenuous first-place position in their division.

I would have preferred to use some more tasteless Native American observations and comparisons but I used them up in my earlier posts.

I do remember as a child growing up that I enjoyed watching Chief Nock-a-Homa emerge from his teepee and do a dance every time a Brave, usually Hank Aaron (who was about the only Brave player who ever did anything interesting during the years that he was unfortunate enough to play for such a streak of bad teams), hit a homerun.

From such terrible influences as 1960’s TV, warping the minds of children with such odes to pain as ‘the agony of defeat,’ it’s no wonder that my view of the world is so screwed up now, so my apologies to folks of Native American descent.

But when one’s only view of Indians comes from such fodder, one must consider the source. Guess I’ll have to brace for the scathing comments to come. As Hillary advised, time to circle the wagons.

Now the Giants leave the league and the country to try to complete the work that Benedict Arnold screwed up; destroying the Canadian threat. Oh no! Another special interest group to offend!

The Giants will need to rise early to snatch the two worms in the form of wins from feeding the gaping maws of the Blue Jays, another team of underperforming and overpriced talent, or lack thereof.

To reward the continuing use of unapproved performance-enhancing substances, the Giants will present that steroid monger, Melky Cabrera, for being on the milk, with diamonds and gold. I say, to heck with abolishing any substance. Legalize it all and let the gargantuan he-men duke it out to the morbid fascination of the modern gladiatorial spectators. To even it up a bit, pitchers can throw spitters, too. That will compliment RA Dickey's repertoire nicely.

Everyone loved Mark McGwire and Sammy Sosa. Though not quite everyone loved Barry Bonds, they certainly loved to see him play and to boo him. Now that we know that even the revered Mickey Mantle cheated, arbitrary lockouts ruin the whole illusion.

While we’re at it, let’s start testing baseball writers and fans for illegal substances. No, wait a minute. They paying to see a game rather than being paid to play it.