Published on 8-Apr-2013 by Stacey Mickles

It's just over a week into the new baseball season and we already have our first controversy.

For once, it's not coming from the Yankees or Mets, but the Atlanta Braves.

The Braves, who had a come-from-behind victory against the Chicago Cubs on Sat 6 April, noticed late in the game that their first baseman, Freddie Freeman, limped down the line after putting the ball in play.

Rather then take a chance on one of their best players being hurt for a longer stretch of the season, the Atlanta promptly put Freeman on the disabled list, a unilateral move that wasn't greeted very well when he got the news.

"They didn't even give me a choice," he said. "It's my career. I should be able to make that decision."

"They didn't even tell me anything."

Freeman has begun the season at a blistering pace -- 4-for-12 (.417) with a homer and seven RBIs -- so it's understandable he didn't want to interrupt his hot streak. However, the Braves management responded by, in essence, saying, Look it's our job to run this team, and that includes protecting your ass -- and our asset -- from being injured any further."

OK, they didn't exactly say that word for word, but that was the gist of it. While it's admirable, especially in this day an age, for a player to protest loudly about being sidelined, an examination later did show Freeman has a strain to his right oblique. The Braves and everyone else in the game know Freeman is capable of catching similar fire on many more occasion and the season is still young.

This may be one of the few occasions when a club and a player's agent are on the same page.

Freeman is arbitration-eligible in 2014 and due to become a free agent in 2017. 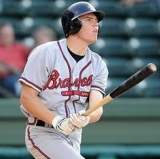