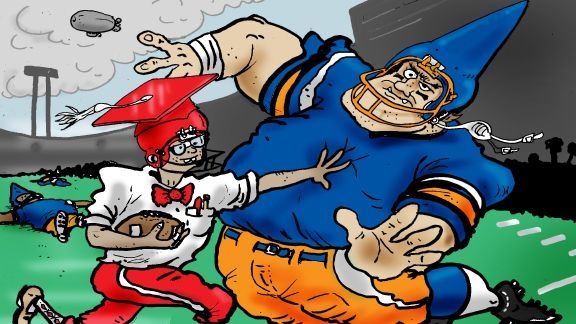 There are two good wild card scrambles and one pennant race going on in baseball right now, but you wouldn't know it by the ratings and sports talk.

College football has played three weekends, and already the ratings have been off the charts, although not even Nôtre Dame and Michigan could outdraw Duck Dynasty. Still, the Alabama vs Texas A&M showdown on CBS last Saturday pulled strong numbers, which isn't bad as Games of the Century go.

The NFL has gotten off to a fast start, with close, last-second and overtime games. The NFL never has a problem with ratings or exposure, and this year is no different, with exciting finishes and the Manning Bowl in New Jersey adding to its luster.

Baseball now can only hope for Tuesday and Wednesday ratings as Monday Night Football and now Thursday Night Football -- and even some college games on  Friday -- will take away from "America's National Pasttime." What were most people watching tonight, the Texas-Tampa fight for the wild card or two 0-1 AFC North teams hoping to avoid 0-2?

The answer is as simple as an over/under or a point spread.

What should baseball do?

Well, for starters, keep in mind the ratings cited here are overall numbers.

Baseball, hockey, tennis, and golf all do very well when the ratings are broken down to specific demographic groups. It's why you see ads for luxury cars at Grand Slam events, for example. Hockey fans are considered among the most rabid and loyal in sports -- not to mention skewing well in the coveted 'males 18-34' market -- and advertisers like Enterprise have done well with it.

And don't worry about baseball, which uses its inventory of 162 games per team to attract broadcast outlets hungry for programming. There's a reason baseball has the highest minimum salary in all of sports -- $490,000 this year -- and can afford guaranteed contracts of mind-boggling proportions. Not even the NBA can keep up with baseball in that respect.

So, yes, it makes good headlines for football to boast it is the current sports opiate of the masses. But is it the most effective?

The stats of other sports would beg to differ.