End of the Line for Ryan Howard? 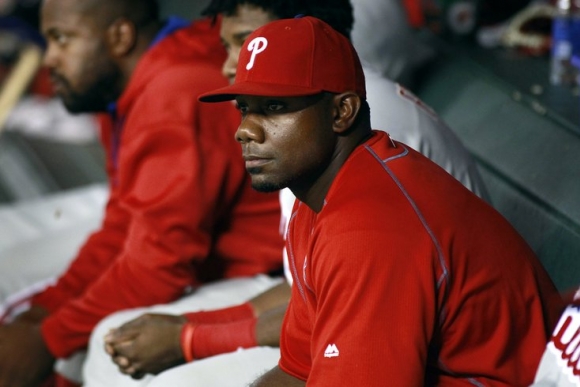 The Philadelphia Phillies were hanging right in the NL East race until a recent tailspin knocked them off the pace.

Still, Phillies and NL East race was legitimately used in the same sentence.

But there's still time for a surprise or two to come out of that club.

Not all that long ago, the team was able to make it to two consecutive World Series appearances in 2008 and 2009, cashing in on the first one.

Nevertheless, the Phils were seen as one the premier teams in the league coming into the 2010 season.

How much did it cost to ensure that Howard remained in Philly?

Only $125million over five years, the second-largest contract at the time behind Alex Rodríguez.

Was it a lot of money? Damn right it was. But it seemed to be a good deal. After all, dude was a home run machine.

Howard did well in the first two years of his mega-deal, but everything changed after the 2011 playoffs.

That's when this tank of a human was 'running' out the final play of the NLDS and tore his achillies.

This would be the first of many lower body injuries he'd would incur over the next few seasons. The list would would include:

The toll they took, as well as time marching on, has seen Howard’s offensive numbers decline since signing his bloated contract in 2010.

Now in that contract's final year, a 36-year-old Howard is making a whopping $25million. His batting average is well on the interstate, and he has a 53:22 strikeout-to-hit ratio.

With their commitment to Howard drawing ever closer to the end, Phillies manager Pete Mackanin has opted to put him on the pine for a few days so he can clear his head.

This decision is also based in part to give rising rookie 1B Tommy Joseph more playing time.

There's a chance Howard might get his job back, let alone finish out the final year of his deal. At that point, it's a foregone conclusion the Phillies' best interest will be to cut bait with him, especially if Joseph keeps playing well.

It’s sad to think how in a decade, Howard went from league MVP to an injury prone, overpaid, shell of his former self.

And yet, clubs keep offering long-terms with no end in sight.

Amaro's mistake was failure to realize those are actually baseball's version of musical chairs. A team can't be caught standing pat when the music stops.