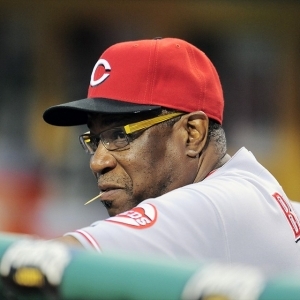 Dusty Baker has a certain genius in his managerial style that seems to disappear during the big games.

He often gets his teams to the playoffs. Next season, after the dust settles, will be the test for the Reds’ theory about needing a new manager. Dusty done good, though, as most 64-year-olds don’t command a few million dollars in salary. With one year left on his contract, he probably won’t be too worried if Social Security goes in the crapper.

Emotions were certainly running hot on MLB.com over Baker’s firing, with 61 pages of comments. How about that: almost one page of comments for each of Baker’s years? That is somewhat similar to the Reds’ opinion about Baker's ongoing services. Almost doesn’t count. Every losing team needs a scapegoat. For example, the Cubs’ scapegoat really is a goat. One Cubs fan noted that the Reds should be thankful about what they were able to achieve. And a Cubs fan should know.

Commenters can be cruel and often are. The venomous comments from the many Reds fans seem very unsportsmanlike. A Yankees fan that rightly pointed out that Reds fans “sure are whiners” was given the old Buckeye heave-ho.

Poor old millionaire Dusty. It was kinda mean, though, for the Reds front office to so unceremoniously dump him a couple of days after the playoffs.

We'll see how his successor fares next season and those that follow. This move may appease Reds fans now, but a standard of sorts has definitely been set. The consistency of Dusty at the helm is that, as mentioned earlier, he gets there.