David Bell Refuses to Stick Around for a Full Game 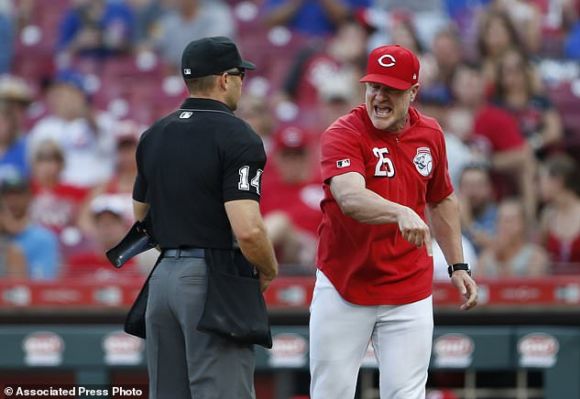 A typical MLB contest can be a tedious affair, with many nine-inning games clocking in at over three hours.

That's a long time to do anything, let alone watch alternating walks, strikeouts, and homers.

While the important people in suits futilely attempt to curtail this with pitch clocks and other such foolishness, David Bell appears to have figured out a solution. For himself, anyway.

Dude's decided to get tossed from every single game.

We're clearly exaggerating for entertainment purposes, but the Cincinnati Reds' skipper has been ejected from seven of his team's 95 games so far this season, which is an alarmingly high percentage.

In fact, it's already a franchise record, with 67 games left for Bell to pad his dubious total.

Let's have a look at Bell honing his craft the other night against the Cardinals:

Eugenio Suarez and David Bell have been ejected from the game. pic.twitter.com/IiUNkAyVRK

As Reds play-by dude Thom Brennaman helpfully pointed out, this is also the most times a rookie manager has ever been ejected in a single season.

Well, congratulations appear to be in order.

Of course, managers are usually tossed as a result of protecting their players, and Bell has fallen on his sword numerous times, particularly with Eugenio Suarez.

Hmmm, that was peculiar.

Here's Bell discussing the most recent one:

He's certainly right about losing your starting third baseman in the first inning.

Bell seems resigned at this point, as between Suarez, the animated Yasiel Puig and the completely deranged Derek Dietrich, he's very likely to be spending more time sprinting out of the dugout and popping veins in the future.

In fact, the Reds as a team lead the entire league in ejections with a staggering 15 of them.

David Bell was ejected seven times total in 12 seasons as an active player.