Cubs' Depth Could Be Getting Tested Early

Published on 8-Apr-2016 by Alan Adamsson 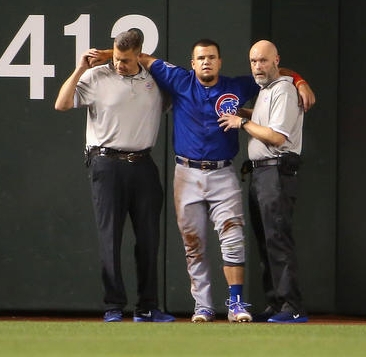 Here's the obvious bummer about being the World Series favorite at the start of a season:

The season still has to be played.

If ever there was a year when the Chicago Cubs looked poised to shatter their 108-year-old drought, this is it.

Their super-sharp general manager signed a pair of blue-chip players from their division rivals and have an mega-trendy manager to navigate the waters.

What could possibly go wrong?

Well, the fact that young slugger Kyle Schwarber has to play a defensive position, for one.

The Cubbies are saying that collison with Dexter Fowler in Phoenix last night resulted in a sprained ankle. However, it certainly appears there may be more to it.

Update: There was. Ripped up ACL and LCL. Schwarber's done for the season.

Dude exploded into baseball's national consciousness last season, capping it with an impressive display of firepower in the playoffs:

Acutally, it came to rest on the scoreboard, adding another entry into Wrigley Field lore: Dude's already proven

Yes, they really did that.

Proof yet again that this club badly needs a trophy.

Schwarber's a converted catcher because, being real, dude was a horrorshow behind the plate. So, Maddon asked him to try the outfield.

The Cubs' skipper would be better served to send him out there with a kitchen mitten under orders to only touch the ball when it stops rolling.

On paper, Chicago has the outfield depth to cope with injuries. Kinda like, on paper, they're favored to win the Series.

All of which raises eyebrows that they moved Kris Bryant to left after the collision instead of an outfielder.

Favorites or no, these are still the Cubs. Expect a dramatic season.