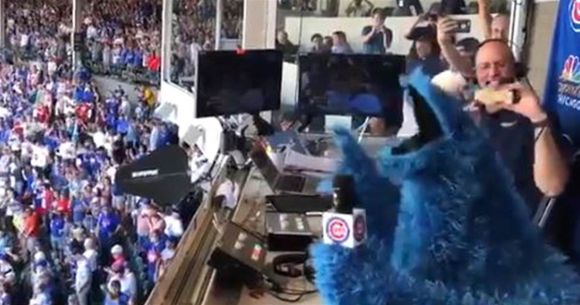 Hey, what's that delightful aroma emanating from the broadcast booth at Wrigley Field?

Why, it's a fresh batch of cookies, courtesy of the single-minded Cookie Monster, who in a stroke of genius was invited to perform guest conductor duties for the Cubs during a game against the Atlanta Braves.

Of course, this required the blue Muppet to lead the crowd in the singing of Take Me Out to the Ballgame, a chore that isn't necessarily associated with his skill set.

Well, we were foolish to doubt Cookie, if only for a moment.

Have a watch and a listen:

As the googly-eyed beast explained to the crowd, the letter C was indeed for Cubbies on this day, which was possibly a concession negotiated by the Cubs organization beforehand.

Cookie Monster is usually pretty rigid with such things, but was surprising flexible on this occasion.

It's good to see our friend is getting the help he needs.

As far as we know, Cookie Monster is the first resident of Sesame Street to perform these sacred duties at Wrigley.

We did unearth footage of Bill Murray channeling Daffy Duck during the 2016 World Series, but that's Looney Tunes, anyway.

Also, it's worth noting that Cookie decided not to unveil his Harry Caray impression, which is a creative choice ignored by others in the past.

Looking at you, Ryan Dempster.