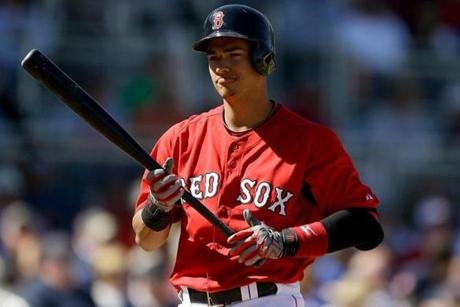 With Will Middlebrooks and Shane Victorino on the disabled list (seems to be the most exclusive club on the Sox of late), José Iglesias has gotten a second chance at the bigs this season.

Iglesias made it to the show early in 2013, standing in for Stephen Drew on Opening Day, playing in six games before heading south for Pawtucket.

Iglesias impressed in his first week of the season, although most of those numbers are a tad misleading. Iglesias hit .450, yet a bunch of his hits never left the infield. Still, he showed he has what it takes to be a dynamic player at the plate and has the slickest glove at shortstop; purists may cringe, but Iglesias' defensive skills allow him to be mentioned in the same breath with the all-time best in history to play the position.

When Iglesias was sent back to the minors, reality set in, and as he came back to earth so did his level of maturity. After jogging to first rather than running out a ground ball, Iglesias was benched to learn a lesson.

It is understandable; going from Boston's highest-rated prospect to becoming an afterthought and then being called up on Opening Day is quite a journey. Iglesias is a gifted fielder, but his bat leaves many question marks. His numbers in AAA have done little to encourage any hopes of his clicking at the plate. In 33 games, Iglesias has hit .202 with a .262 OBP. He has hit four home runs, though, which is something to be happy about, but that lack of getting on base is tough, especially for a number nine guy.

So what will the Sox get with Iglesias this time? The hard working, humble kid who gives 100% or the sour, immature star that was wallowing in Pawtucket up until three days ago? As long as Middlebrooks is hurt, 'Iggy' will probably take over third (either that or the defensively challenged Pedro Ciriaco will get the nod). This is his chance to show he has what it takes, but to also show that he has the will and desire to improve with every chance he is given.

When Iglesias goes back to Pawtucket, it won't be a demotion but a chance to grow.

The question is whether or not he will realize that.