BoSox Bring the Boom in 7-4 Win

Published on 6-Oct-2013 by Tyler Scionti 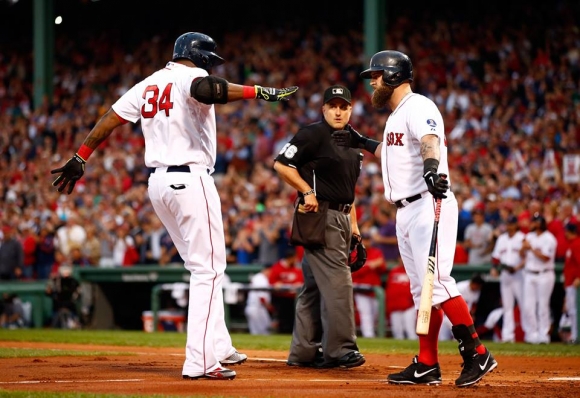 Now riddle me this: 'way back when the Tampa Bay Rays were actually intimidating, did you think you would wake up on Sunday morning knowing the Boston Red Sox hold a 2-0 series lead over thm?

Someone call Sox owner John Henry and tell him the Rays might not be as tough as he once thought, because now Tampa Bay is facing a potential sweep to end their playoff dreams.

With David Price on the mound, fresh off of his complete game victory over the Rangers, the Rays had a very good chance of beating the Sox. After all, Boston has not hit lefties well this year, and many could consider Game 1 a fluke. Enter David Ortiz: Big Papi went 2-3 with two bombs to burry the Rays and their chances of winning. Even with a poor start by Lackey -- 5⅓ innings, 4 runs -- the Sox pulled ahead and took Game 2 of the series.

While the offense has been good, the Sox bullpen has been great. Three pitchers tossed a combined 2⅓ innings of shutout relief. Don’t forget Koji Uehara, closer extraordinaire, who needed just 11 pitches to slam the door in the ninth. Seriously, how crazy good is this guy?

With the momentum in Boston’s favor, they will take it down south to the Trop where they hope to seal the deal.

Clay Buchholz will oppose Alex Cobb on Monday night at 6pm, as the Sox pin their clinching hopes on their oft-injured starter. Cobb has been good all season -- 11-3 with a 2.76 ERA -- but has been downright awful against Boston; he's gone 0-1 in four starts with a 5.16 ERA.

Buchholz has been a different story, as he is 2-0 against the Rays with an ERA of 0.00. The question that remains, though, is can Buchholz resume his pre-injury form, or will he falter under the pressure?

If you ask Joe Maddon, he seems to think the Sox will crack, as he is already prepping for Game 5 back at Fenway.

Well, what ever helps you sleep at night, buddy.