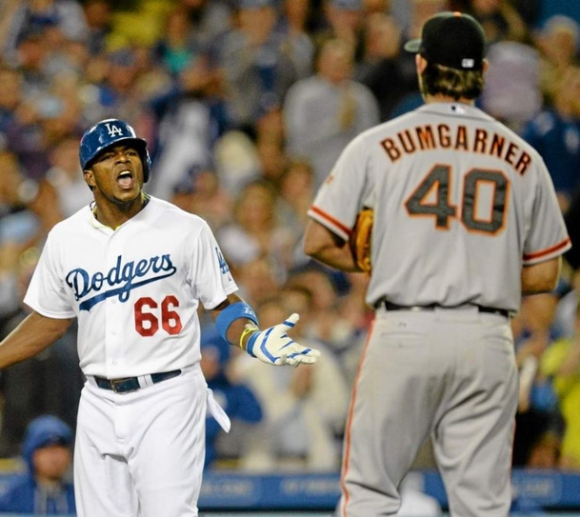 Yankees-Red Sox. Auburn-Alabama. Cardinals-Cubs. Packers-Bears. USC-Nôtre Dame. And so on.

The NHL? Different category. How can rivalries in other sports be compared to those where dropping the gloves is part of the game? Intensity is second only to oxygen -- barely -- in those arenas. So that's a different level of discourse.

Pucks aside, then, for sheer animosity in the midst of competition, nothing beats the San Francisco Giants and Los Angeles Dodgers.

They proved it again last night. Frustrated by watching the Bums pull away in the NL West but still caught in a tight wild card race, Giant ace Madison Bumgarner couldn't resist the temptation of dropping a hint:

If Hong Sung-Heon ever leaves South Korea's Doosan Bears for either one of these teams, it will stagger the imagination.

Giants-Dodgers -- or in some quarters, Dodgers-Giants; it makes a difference -- rekindles crazy memories, such as:

Far and away, the ugliest incident in baseball history happened in 1965, when Giants' legend Juan Marichal took a bat to Dodger catcher John Roseboro's head, opening a two-inch gash.

None other than Sandy Koufax -- that's him coming to Roseboro's aid in the left photo -- was the pitcher who dusted Marichal and triggered the melée.

Rationality went out the window last night when Puig shot a menacing stare at Bumgarner after being clipped. It was a 1-2 cutter. Where's the malice in a 1-2 secondary pitch? That was nothing more than a calling card. This is where the Chewbacca Defense kicks in:

Bumgarner said as much afterward:

Who would expect less from a Giants-Dodgers game? Or a Dodgers-Giants game?