Baseball's on the Clock ... Kinda 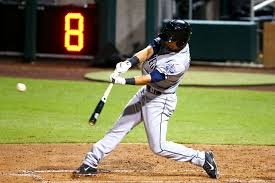 If anyone had earned a nickname, it was him.

Dude was known as the Human Rain Delay.

Suffice it to say he took every one of his plate appearances seriously. As well a batter should, getting only four or so per game. And Hargrove's pitch-by-pitch approach had to be just so:

But now that's going the way of the dodo bird.

As of the second month this season, batters have to stay put ... for the most part.

Upon further review, sorta cheesy. As in Swiss; lotsa loopholes. But the penalty is definitely 21st century: first a warning, then a fine. No real effect on the game. Nominal effect on the bank balance.

Maybe players will realize that every pitch is not Game 7 of the Series. Curious to see how concessions sales fare. The guessing is neither of these will change very much. After all, there's already a 12-second rule on the books that's never been enforced, and nobody's been all that bothered about it.

Until now. So what happens? They're gonna experiment with a 20-second rule at the AA and AAA levels.