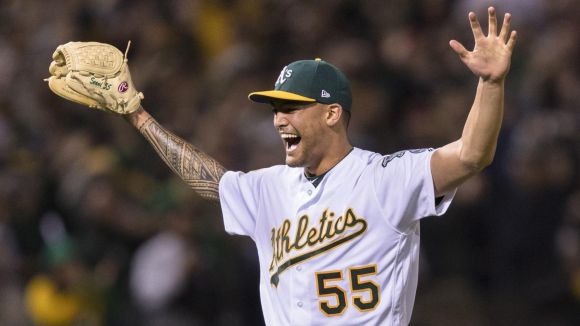 Amidst all the dingers and punchies dominating baseball conversations these days, one glaring point sneaks in there.

Last year, only one no-hitter was thrown.

Edison Vólquez did the honors while toiling for the Marlins with Arizona's formidable Diamondback attack being silenced.

Now, MLB has registered it's first no-no of the 2018 season, complements of Oakland's Sean Manaea:

As rare as these feats are these days, no one's gonna argue very hard that the official scorer took a bitta artistic license on the alleged error.

As for the other interesting play is concerned, the blues got it right. Boston's Andrew Benintendi strayed in his journey to first base, and Rule 5.09(b)(1) says that is a different sorta no-no.

“He has three feet either way. So if he goes more than three feet avoiding the tag he's declared out for being out of his baseline.” pic.twitter.com/TXMofuTfkv

Here are the two plays in question:

Fact is, dude threw a hell of a game, doing what most pitchers are this season. Namely, tickling fringes on everything but high heat, which is the only sorta challenge where they figure the odds might be in their favor.

When Manaea wasn't fanning 10, the few mistakes he made weren't punished by the BoSox.

What with launch angles being in vogue, the top of the strike zone is still one place where they can dare a hitter to bite without necessarily being concerned about pitching to contact.

Interestingly enough, if ever there remains a pitcher's park in The Show, it's Oakland's antiquated stadium.

The lone remnant of the cookie-cutter multi-purpose facilities built in the 1960s, the abundance of foul ground has made for many an out instead of a fan's souvenir. And yet, Manaea didn't need the advantage.

Leave it to the A's to hand Boston only its third loss of the season. Already middling along with a break-even record, Oakland does its best to:

If Billy Beane does start dealing, Manaea may have given him another ace to put on the table.