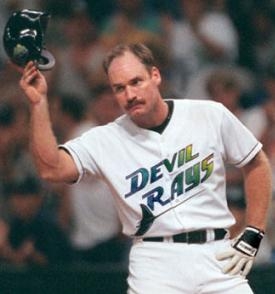 Tampa Bay and Oakland have the two worst stadiums in Major League Baseball, and it’s a race against time which city blinks first to deliver new venues for these clubs.

Poor stadiums and attendance haven’t kept either franchise from winning over the past few seasons. Oakland has won the last two AL West titles, and some experts are picking the Rays to win the American League pennant in 2014.

You wouldn’t know it by the Rays' first 10 years in existence, as they were one of the worst franchises in baseball. However, they buried their image as incompetents by making it to the World Series in 2008 and have been back to the post-season three times since then, falling in the Division Series each time.

The Rays dealt Red Sox closer Koji Uehera his only playoff loss when backup up C Jose Lobaton hit a game-winning home run off the World Series MVP. Needless to say, Lobaton did not make the All-Time Snark team. There was only one catcher that warranted serious consideration.

As has been a common theme with this series, we’ve featured many players from expansion teams, and Tampa Bay’s inaugural 1998 season produced 99 losses. It was all downhill from there. They lost a franchise-worst 106 games in 2002. At least, they evolved the rainbow Devil Ray logo into something most fans aren’t embarrassed to wear. Of course, there were a few holdouts.

In Peña’s defense, he did have a couple of monster years for Tampa Bay before spending one miserable season on the south side of Chicago, and then returning in 2012, where his strikeout count almost equaled his batting average. The days of the slugging first baseman are over!

As mentioned previously, the Rays lost 106 games in 2002 -- the low point for this franchise -- so it’s no surprise to see at least one player on the All-Snark team. Abernathy stole a few bases (10) and didn’t make many errors (12), but somebody had to play 2B on this team.

The Rays tried a different approach after their expansion season by bringing in some high-priced veterans like Castilla, Fred McGriff, Jose Canseco, Wade Boggs, and Greg Vaughn to try and generate some excitement to the eastern shores of the Gulf of Mexico. The experiment lasted about two seasons. Castilla had his career years in Colorado. Gee, I wonder why?

Stocker was traded by the Phillies to the Rays for Bobby Abreu. You win some, you lose some. You get completely obliterated by some others. Oops!

This group was a surprisingly hard one from which to select qualified candidates. It's part of the reason you see Upton on the list. The Rays have had some whiffers over the years, and now Upton is Atlanta’s problem. In fact, both Uptons are Atlanta’s problem. Fuld had a key RBI triple in a recent A’s-Mariners game and was thrown out at home trying to stretch it into an inside the park home run. Notice this was during the A’s game. Notice that he was thrown out.

For a team that lost more than 90 games each in their first 10 years of existence, I expected much worse W-L records. But in the age of the specialist relievers, some pitchers probably didn’t get the pleasure of sticking around for a late-inning victory, or defeat, as will be illustrated by the All-Snark bullpen. Tanyon Sturtze was probably part of the reason Tampa Bay felt compelled to trade All-Star OF Randy Winn to the Seattle Mariners for manager Lou Piniella. Not even a future HOF manager could turn around those gawd-awful 2003-2005 Devil Rays teams. No, that took a Coke-bottle thick, jet-black-rimmed glasses-wearing kooky manager Joe Maddon. Nothing motivates players like having a reticulated python slither around the clubhouse before a game.

OK. I think we’ve identified our All-Time Snark bullpen. If we were to create a Frankenstein-style mash-up, here it is. When the lowest ERA out of this group is 7.07, you know you’ve found something special. Real special. There are enough hits, walks, and home runs to go around; these are like video game numbers. What’s truly astounding is Stokes was allowed to pitch in 62 innings and Santana 56. Ah yes, the growing pains of an expansion team.

What’s even more astounding is that Lance Carter was an All-Star in 2003. Hmmm, maybe the naysayers have it right by eliminating the 'every team must have an All-Star' rule. Keep in mind, 2003 was the first year of the 'this time it counts' for home field advantage in the World Series. Leave it to baseball to have a knee-jerk reaction to a non-issue but take nearly 20 years to address its biggest problem, PED use. Ranting mode over, as I’m pleased to present your All-Snark team closer for Tampa Bay.

It’s not often teams make such drastic changes to their moniker and uniforms after such a short period of time, but as we inferred above, somebody in the organization thought that Devil Rays was just too satanic and the team's low attendance was keeping spectators away because the name was offending the area's Christian population.

Mind you, some players might still resort to a cult fling or two if it put them in the playoffs.

And Ray Walston make a great devil, recruiting a player's soul to spark the late, unlamented Senators to a pennant:

But in general, those methods aren't going to play well in a world where the press now has locker room access.

So maybe that somebody in Tampa’s front office was also watching a late-night episode of Nova and discovered that there's no such thing as a 'Devil Ray.' However, devil fish is a nickname given to the manta ray, some of which are on proud display beyond the outfield walls of Tropicana Field. For years, this in-stadium aquarium was a bigger draw than the team on the field.

Apparently consistently making the post-season and having one of the top players in baseball -- Evan Longoria -- isn’t enough to even sell out a post-season game. Maybe Oakland and Tampa Bay could meet in the middle and share a brand new state of the art facility in say, Nashville, or Indianapolis.