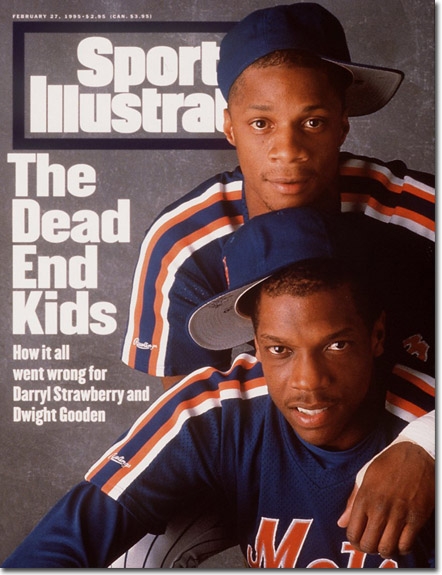 Step right up and greet the Mets!

Bring your kiddies, bring your wife

Guaranteed to have the time of your life.

If you really want to meet these Mets, you must have nothing better to do and really need to assess where you’re at in life.

Since the Metropolitan Baseball Club came into existence in 1962, they have won two World Series titles. Granted, one was a direct result of Bill Buckner, who to this day can’t show his face around town in Boston.

They started out losing over 100 games in four consecutive seasons, only lost 95 in 1966, and then promptly went back to breaking the 100-loss threshold in 1967. It’s no wonder the 1969 World Series Championship team is referred to as the Miracle Mets.

Needless to say, you won’t find any players from the ’69 Mets on the All-Time Snark team. However, the decade of the 1960’s will be well represented.

Hundley set a MLB record for home runs by a catcher in 1996 with 41 -- which has since been topped by 2003 Javy Lopez -- so it’s not like he was a terrible catcher. However, he took a Mike Piazza style behind the plate by only throwing out 23% of base runners that season. Hundley boasts the highest batting average on the All-Time Snark Mets. That would make his father, former big league catcher Randy Hundley proud.

The Mets' second year of existence proved to be much better than the inaugural season, where they lost 120 games, as they managed to 'only' lose 111 in 1963. Harkness defines this era well, as the Mets were by far the worst team in the league. You have to really try to make 14 errors at first base.

1972 proved to be a tough year on hitters, as Steve Carlton, Don Sutton and Tom Seaver dominated the National League. Wait! Seaver was a teammate. So there’s no possible way Boswell faced him, but he saw plenty of Carlton, playing in the NL East. Coulda been why he matched Harkness's batting average. Well done, old sport!

Another player from the ’63 Mets, and another member of the .211 BA club mans the hot corner. What can we say nice about Neal? Well, "....at least he didn’t spike himself."

McMillan rounds out the infield, bringing another .211 batting average to the party. Don’t expect much improvement from the outfielders. They're consistent if not confounding. Remember what I said about the decade of the 1960’s being well represented? There’s more to come.

Agee was AL Rookie of the Year with the White Sox in 1966 and redeemed himself as part of the Miracle Mets team the following season. McRae is a repeat offender, having made the All-Time Snark Kansas City Royals team, and Burnitz was a free swinger who benefited from Coors Field in 2004, but so did Vinny Castilla.

Ah yes, the 1960’s were an interesting time in America. The country continued to define itself with landmark events such as the Vietnam War, the space race, the Cold War, the Civil Rights movement, the Kennedy assassination, and Woodstock. It’s difficult to determine what Mets management was thinking when they put together this expansion team. They were in a no-win (no pun intended!) situation, trying to replace the Dodgers and Giants. Craig actually won 25% of the Mets' games that year and combined with teammate Al Jackson to claim nearly half of the Mets' 40 wins that season. Koosman was a surprise on this team; he was also an integral part of the 1969 World Series team. Perhaps the trade of longtime teammate Tom Seaver that summer caused him to lose motivation, as his Sabermatric stats aren’t all that bad, but a 20-game loser fits nicely in this collection.

Miller joins the bullpen to pair with the rotation mainstays from the 1962 team, and no, that's not a typo. He posted a 10.17 ERA. For real. Rodriguez was part of the bullpen from the 2000 Subway Series against the cross-town rival New York Yankees. Were the Mets so desperate for relievers that they had to fly across the country, then across the Pacific Ocean, lay over in Hawaii, and finally land in Chiba, Japan to watch Igarashi pitch for the Nippon Professional Baseball league and think he would make a great addition to the ballclub? Something got lost in translation.

Franco was a four time All-Star with the Reds and Mets. However, the 1993 season was reminiscent of the early 1960’s for the Shea Stadium faithful, as they produced a 59-103 record. Poor Anthony Young went 1-16 that year; if he had started more than 10 games, he would’ve received stronger consideration for the starting rotation. Chalk this year up to bad luck, because Franco led the NL in saves in 1994 and posted a sub-3.00 ERA the following four seasons. I’m sure Mets fans chalked it up to, well, being a Mets fan.

The current version of the New York Mets have proven to be as infuriating as their inception squad, are riding a streak of five consecutive losing campaigns, and you can write it down that 2014 will make it six, as they won't have stud pitching phenom Matt Harvey all year.

Post-season play has been even more elusive. The Mets last taste of October baseball ended in typical, heartbreaking Mets fashion in the 2006 NLCS to the eventual World Series champion St Louis Cardinals in seven games. It had to be even more excruciating for Mets fans to see October legend Carlos Beltrán watch Strike Three whiz by him with the bases loaded in the bottom of the ninth at home in Queens.

Many expected manager Willie Randolph to lose his job over the post-season collapse, but he hung around for two more seasons, partially because owner Fred Wilpon was too busy analyzing the returns and dividends from Bernie Madoff’s ponzi scheme.

The Mets did get to host the 2013 All-Star game at their brand new, government bailout funded Citi Field, which caused commentator Keith Olberman to repeat the name on air enough times for viewers to get the point, or joke, or whatever his point was. We’re grown up enough to understand Citi rhymes with another four-letter word.