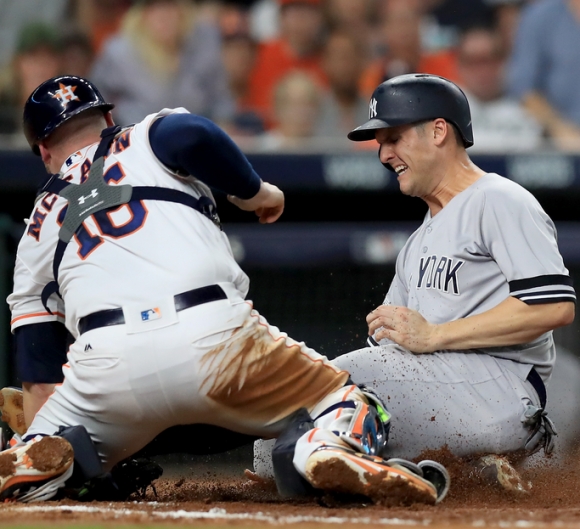 Dude was ready when his time came.

It just didn't involve his bat.

In one of the pivotal early moments of Game 7, Bregman had prepared well in advance for the situation that arose and handled it flawlessly.

The similar play Bregman cited occured on Sun 24 Sep against the Angels.

Then, he did try to start a double-play, but it didn't end well. Houston lost the game, 7-5, and Bregman clearly made a mental note of it.

Unless someone taps into a parallel universe, we'll never know if that play actually saved the game ...

... but it definitely had an impact on its perspective, approaches, and strategies at that crucial time.

For example, it was obvious by then -- the fifth inning -- that Charlie Morton was dealing.

It took a perfect play to get him at home, so the Yankees can't be faulted, really.

Bird did all he could to kick the ball outta Brian McCann's glove, but Bregman's bullet of a throw had lodged perfectly into the web of his mitt. McCann himself probably couldn't have dug it outta there.

Moral of the story: there's more than enough stuff for players and teams to process between pitches. The only part of the game that really needs to hurry it along is replay review.

Meanwhile, taking in everything Game 7 featured was time well spent, especially for the 'Stros:

So, the 2017 ALCS does become the first in which the home team has won each time in a seven-game series.

And Houston has become the first franchise to reach the World Series from each league.