Angry White Dude: A Tip of the Cap 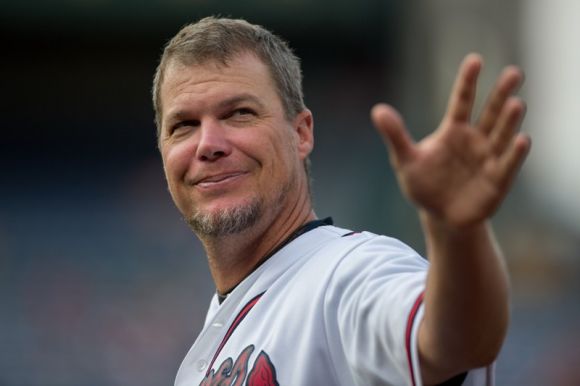 Dude just got elected to the Baseball Hall of Fame.

Man, could he get it done!

I truly hope you had the chance to watch him over the course of his career.

Jones is one of those rare modern-era players who spent his entire career with one organization. The way the game is anymore, that's incredible.

I'm not going to go overboard and bore you to death with a bunch of stats, but he put up some amazing numbers. For example:

Then there was this in Game 1 of the 1999 World Series against the Yankees:

In true baseball fashion, Jones learned the game from his father, who was a big Mickey Mantle fan.

It was his dad who taught him how to switch-hit at a very early age, and now his son is right there with the Mick in the Hall of Fame.

We're always hearing about players who are first-round busts.  Well, Mr Jones was the first overall draft choice in 1990. The scout who recommended him to Atlanta is Tony DeMacio; no wonder he ultimately wound up being the organization's scouting director.

Incidentally, the first scout who ever saw him play worked for Cincinnati. Obviously, since they didn't draft first, the Reds never got a shot at Jones.

Chipper's alongside some very elite company.

He joins Babe Ruth, Stan Musial, Lou Gehrig, Mel Ott and Ted Williams as one of only six players in MLB history to record a ...

Where does Jones rank on the all-time switch-hitter list?

Well he's certainly right up there with the best.

A TV show listed him as the second-best in MLB history. As usual, though, most TV shows are stupid.

You want the top two switch-hitters in MLB History? I've got two words for you:

Congratulations, Chipper Jones! You're a Hall of Famer!