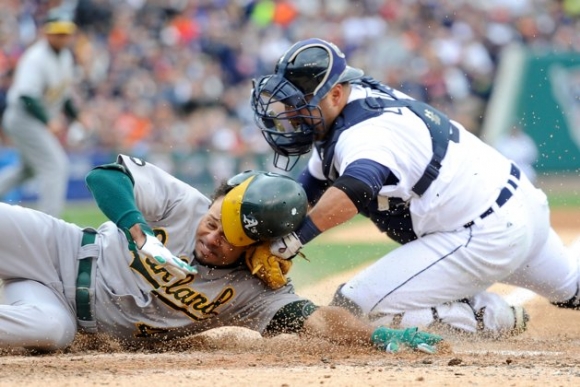 While the American League East is upside down so far this season, the Central and West look the same.

Detroit and Oakland top those charts.

The Athletics just confirmed that they think they can win the whole thing this season by trading for Jeff Samardziga and Jason Hammel. Oakland -- beaten by the Tigers in five games in the past two seasons in the division series -- thinks these two pitchers can get them into the World Series.

If they can get past Detroit.

Detroit leads upstart Kansas CIty by four games in the Central division. While the Royals are a good story, that's about it. They're still missing too many pieces to be a title contender.

The Tigers are a better team and should cruise to the division title. Star pitcher Justin Verlander has struggled this season, but Max Scherzer and Anibal Sanchez have pitched well in Detroit's starting rotation. Victor Martinez is an All-Star at the DH spot, while Miguel Cabrera and Ian Kinsler have had solid years for the division-leading Tigers.

Oakland, even with their new pitchers, will have a tough battle with the Angels and -- dare we say it? -- the Mariners. Los Angeles-in-Anaheim -- yeah, that's a still stupid wrap-around -- is 3½ games back while improving Seattle is six back. The Angels are led by all-everything Mike Trout.

The New Jersey native already has 20 home runs, and if Albert Pujols can stay healthy, Los Angeles-in-Anaheim will be in the race until the end. Outfielder Josh Hamilton and pitchers Jered Weaver and CJ Wilson have been OK but need to be better for the Angels to be playing in October.

Seattle is in the race thanks to the Yankees letting Robinson Canó leave. Canó and star pitcher Félix Hernandez are the leaders of this team, and with a little help, Seattle could make noise during the late summer. Fernando Rodney has been effective as the closer, and if Seattle can get some hitting help from someone other than Cano, there could actually be a three-team race in the AL West.

But Detroit and Oakland are the stars in these shows. Kansas City, the Angels, and Seattle are going to need a boost in some way, shape, or form if they want to keep that from happening for three years in a row.