Published on 5-Aug-2013 by Stacey Mickles 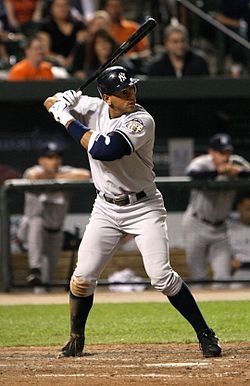 Finally, after weeks of speculation, here's the least surprising headline in sports this year:

Commissioner Bud Selig said the ban would be in effect for the rest of 2013 and all of 2014 for his role in the Biogensis scandal.

Rodriguez, along with several other major leaguers -- including Nelson Cruz of the Texas Rangers and Jhonny Peralta of the Detroit Tigers -- were suspended today. Unlike A-Rod, Cruz and the others will 'only' be sidelined for 50 games.

Here is the statement from MLB:

Based on his use (A-Rod)and possession of numerous forms of prohibited performance-enhancing substances, including Testosterone and human Growth Hormone, over the course of multiple years...for attempting to cover-up his violations of the Program by engaging in a course of conduct intended to obstruct and frustrate the Office of the Commissioner's investigation.

A-Rod is expected to appeal the decision and be in the Yankees lineup tonight, so it might be weeks before this actually comes to an end.

"I am disappointed with the penalty and intend to appeal and fight this through the process," said Rodriguez.

Forget all of that. The interesting part will be watching the reaction of a Yankee front office that was dying to get rid of him. As it is, an appeal would enable A-Rod to play in New York's game in Chicago tonight. What with an abundance of negative opinions from players and public alike, this situation may not have even gotten to the ugly part yet.

Ironcially, the Yankees may need Rodriguez if they plan to make any kind of push for the playoffs. They are 9½ games out of first, but they are still within striking distance in the wild card race.

Considering the fact he was about to get a lifetime ban, Rodriguez should take his punishment and shut up, because this actually sounds like a good deal for him. There was every indication Selig would have banished him to Antarctica on a commissioner's whim, but as the MLB Players Association has been supportive of his efforts to get this issue sorted, it was politically expedient for him to allow A-Rod an avenue for recourse.

Still, if you think about it, this suspension is virtually a lifetime ban, anyway. If he just swallows hard now and returns in 2015, he'll be turning 40 during that season, which is no doubt why A-Rod would fight this. He gets his pay in 2013 dollars -- as opposed to possible inflation-affected 2015 dollars -- and he, in theory, won't be as creaky now.

A-Rod probably remembers -- like the rest of us -- what the steroid scandal did to Barry Bonds' career, ie- the uproar basically ended it. Bonds, like A-Rod, was in his prime when his scandal broke.

No matter how this plays out, A-Rod's reputation is already ruined and he has no one to blame but himself.