Published on 5-Jun-2013 by Stacey Mickles 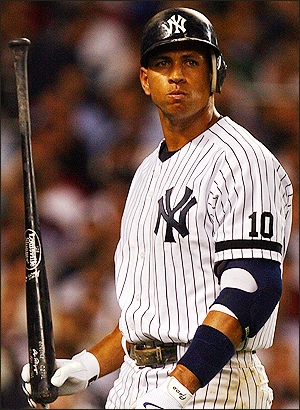 If the New York Yankees were seeking a way to finally get rid of Alex Rodriguez and his huge contract, they may not have to worry about that anymore.

After stories emerged yesterday that A-Rod, Ryan Braun of the Milwaukee Brewers, and several other players were involved in using performance-enhancing drugs (PEDs) and that all could face 100-game suspensions from Major League Baseball.

At least that's what we thought they were facing. Apparently, A-Rod may actually be subject to a lifetime ban from baseball, a development that would send to shock waves throughout the sport.

Anthony Bosch, who is the owner Biogenesis -- which is where A-Rod and Braun got the drugs -- is now ready to sing like a bird and is planning on making a deal with MLB to tell all. This can happen when federal prosecutors start poking around and when MLB cranks up its legal machinery against a dude who is virtually broke and living at various family members' homes on a here-to-there basis.

And this is definitely not good for the players. Braun has already dodged a bullet once on a sample-handling technicality. This one might be tougher.

And Melky Cabrera? He must sprinkle this stuff on his breakfast cereal or something. At this point, few would be surprised if he started endorsing PED ads in body building magazines.

It could be hella tough on A-Rod, who has already missed most of the first half of the season. If he gets suspended again, he'll basically be out all season. If he gets the hammer from MLB, there goes the balance of his contract.

Yankees GM Brian Cashman and the rest of the Yankees management haven't been happy with A-Rod for some time now; Cashman all but said as much during an interview on ESPN:

It seems the "everything he can" part might have been a bridge too far.

MLB has a drug policy for first, second and third offenses:

A-Rod might be closer to that ban than we imagined.