A Pitching Duel for the Ages 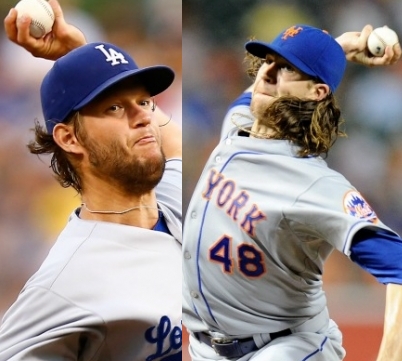 Arguably the greatest aspect of the MLB playoffs is the pitching matchups.

Whereas the long regular season most often denies fans of seeing a meeting of the aces, the playoffs see the crème de la crème of hurlers square off on the grandest of stages.

Legends are made in the course of October.

However, this season’s playoffs have been a bit of a disappointment, as most of these seemingly great pitching duels have been one-sided.

In the Wild Card round:

The early results of the divisional round haven't been much better, as usual aces David Price and Johnny Cueto struggled in their games, although the Royals were able to overcome Cueto’s poor start.

The closest thing to a duel was in St Louis, where former Red Sox teammates John Lackey and Jon Lester met in the first ever Cubs-Cardinals playoff game.

Mound quality showed via a 1-0 Cardinal lead until Lester gave up two game-breaking homers to two dudes who typified St Louis' incredible roster depth. This put the Redbirds up, 4-0, late in the game, and they never looked back.

Then, Friday night into Saturday morning, the post-season's best duel thus far came in the forms of Mets' and Dodgers’ aces Jacob deGrom and Clayton Kershaw.

They posted a game for the ages, setting an MLB record; it was the first time in post-season history that two starters rang up 11 or more strikeouts each.

Kershaw, who would ultimately take the L, notched his 11 punchies in 6⅔ innings of excellent work. Dude was cutting through the Mets lineup until he served one up to Daniel Murphy that he'd like to have back:

Kershaw was able to settle down after that, until he hit a snag in the seventh, when he walked the bases loaded.

Dodgers manager Don Mattingly inexplicably decided to pull Kershaw, which might have cost him the game. David Wright followed with a two-run single off of reliever Pedro Baez.

Meanwhile, Jacob deGrom was in near-perfect form for the game, notching 13 strikeouts of his own, surviving several of his team’s defensive blunders. He finished with seven scoreless innings on a way to a 3-1 Mets victory.

All of which set the stage for a different sort of drama in Game 2. 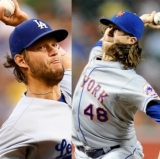 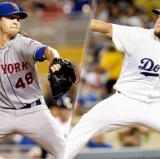