A King without a Kingdom 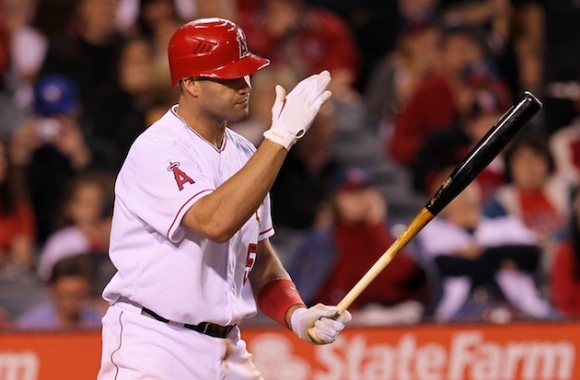 A $254 million contract can buy a lot of things, but respect isn't necessarily one of them.

It seems Albert Pujols brought a sense of entitlement with him when he moved to the Angels. It also seems that concept wasn't accepted by his intended subjects.

Check out the Wed 21 Nov Q&A column by Joe Strauss of the St Louis Post-Dispatch. You'll see a reader relating his sister's encounter with Zach Greinke's wife during an outing in Orlando. It sounds like the Halos' clubhouse didn't exactly warm up to El Hombre's perspective on bequeathed leadership. And when the reader asked the veteran beat writer Strauss if he'd heard the same rumblings, the answer was a succint "Yes."

So, maybe there was more to the Mickey Hatcher firing than Albert's and GM Jerry DiPoto's denials would indicate. Mike Scoscia's good friend -- they came up in the Dodgers system together -- was a popular and effective hitting coach who seemed to have success during the Angels' World Series Championship season. I doubt he suddently got dumb. Apparently, that could have been the consensus among the other players, too.

And it's no secret Pujols called St Louis often to confer instead with the Cardinals' hitting coach, Mark McGwire.

Could this and similar disruptions have cost the Angels a few games last season? Given the final standings, a few games made a huge difference.

Mind you, team chemistry isn't the be-all and end-all of championship seasons. Oakland's Swingin' A's won three straight World Series (1972-74) while practically inventing UFC amongst themselves. Still, game preparations have become so sophisticated these days that players have better ways of spending their team time than grumbling about their own. They don't need the distraction.

And that wasn't part of the bargain in Albert's contract.