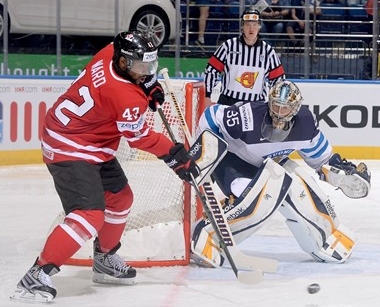 It's one of the few accomplishments Canada has yet to achieve.

In fact, only Sweden has won gold medals at the Olympics and IIHF World Championships in the same year. They did the double in 2006.

And for at least four more years, that distinction will belong to the Tre Kronor only.

Finland put paid to the Canadian dream with a late goal securing a 3-2 victory and a place in the semi-finals. That made it five times running that Team Canada has fallen in the semis.

The Leijonat got the scoring started, but after Ottawa Senator forward Kyle Turris countered at 5:31 in the second, Winnipeg Jets center Mark Scheifele put Team Canada in front just over six minutes later:

But solid veteran Pekka Rinne closed the door after that. The Nashville Predators netminder had the usual sound Finnish defense in front of him, so all that was left to do was wait for an opening. It came on a Tyler Myers turnover that sparked a 2-on-1 with Iiro Pakarinen doing the honors, beating Edmonton Oiler goalie Ben Scrivens for the game-winner with 3.08 remaining.

It's been a strong year for the Finns on the international stage. Blessed with a plethora of strong goalies, they were upset winners in the World Juniors and claimed the bronze medal in Sochi. They'll now face the Czech Republic on Saturday, with Sweden and Russia meeting in the other semi-final.

While Stanley Cup joy and excitement prevail in four North American cities right now, the Europeans -- as they always do for this event -- have made Minsk their site for its annual multi-national hockey party that has one more weekend to run.