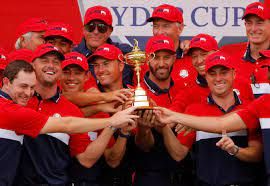 One look at the Whistling Straits Golf Course layout near Sheboygan, Wisconsin -- much less taking a journey around it -- will attest it's been designed for one thing:

How a double-handicap duffer would even attempt to play it -- other than to brag about surviving it -- is surely beyond the grasp of learned humans.

Toss in the fact that the USGA tricked it up even more to challenge the globe's golfing elite, and the result is no less than a bitch course ready to host the 2020 Ryder Cup, albeit a year later due to the pandemic.

Being real, it's best attacked by golfers in their prime, which by coincidence or not, definitely suited the Americans.

With foreboding hazards lurking damn near everywhere, it took the young and the strong to overcome them.

Consider, for instance, Jordan Spieth on Day 1's foursomes. Partner Justin Thomas drove one over a cliff at 17, whereupon Spieth proceeded to show that MLB hitters don't have a corner on launch angles:

One of the more effective methods at taking the hazards outta the equation is to just drive over them, and the USA happened to have just the man for the job:

Eagle sighting! @b_dechambeau with a solid showing at the par-5 5th to tie the match. #GoUSA pic.twitter.com/7Zo3wu7Qrc

Europe's team had the likes of World No 1 Jon Rahm and rising star Viktor Hovland, but long story short, it seemed like the rigors of Whistling Straits took their toll on Ryder Cup stalwarts like Rory McIlroy, Ian Poulter, and Lee Westwood.

Sergio Garcia managed to set a European record for most Ryder Cup points earned in a career with 28½,

Then there's Irishman Shane Lowry, who might've found his calling:

Lowry was right in the middle of it when, for whatever reason, pros-on-pros violence -- or what amounts to that in golf -- broke out by opponents not allowing gimmes to be picked up.

But, hell, it worked for James Bond when it was time for the rubber to meet the road:

If the Europeans had any edge on the Americans this weekend, it mighta been their passion for the competition, but USA captain Steve Stricker addressed that in a hurry before the first ball was even struck.

Brooks Koepka was sounding less than enthusiastic about the team concept of Ryder Cup play, upon which Stricker had a quiet word about what it means to be selected and if he's not up for it, to say it there and then.

The point was made and -- lo and behold! -- it even seemed to spark a patch-up between Koepka and Bryson DeChambeau.

Stricker had no need for extra motivational discourse after Koepka bought in. His side had an obvious physical advantage, evidenced by the USA's commanding 11-5 lead after two days of foursomes and fourballs.

The 19-9 final result was the largest beatdown margin of victory ever under the current Ryder Cup format, which began in 1979. Dustin Johnson was a huge reason why, going 5-0-0 in his matches over the weekend.

The USA looks well-set to defend the Cup in Rome in three years' time while the Europeans have some talent-building to do.

Danish twins Rasmus and Nicolai Højgaard could prove to be in the vanguard of valuable additions, but with so many potential roster spots to fill, it's still gonna be a daunting task.

No matter what, though, the carnival atmosphere seen nowhere else in golf will be there, ready to go.