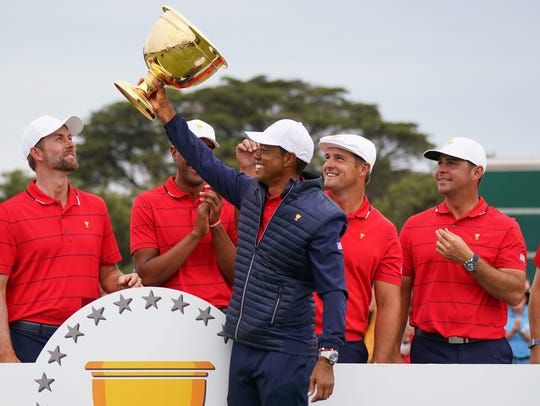 That old warning about being careful what you wish for has struck again.

Before the Presidents Cup competition even began at the Royal Melbourne this week, Abraham Ancer -- the dude who's turned out to be the International team's rookie sensation here -- said he wanted a match-up with Tiger Woods.

The International team's bid to win only their second-ever Cup in a biennial competiton that began in 1994 saw captain Ernie Els pull out every revolutionary tactic in the book, including:

It damn near worked.

After three days of fourballs and foursomes, his Inters came into the singles matchs with a 10-8 lead that was its first at this stage in 16 years.

And that's when Tiger decided it was time to drop the hammer.

The 44-year-old legend proved once again he still had it in him to rise to a momentous occasion when he put himself in the singles slate's first pairing to set the tone.

In a nutshell, that's how Day 4 went.

The USA followed its leader the rest of the day, amassing a huge advantage at one point to the extent a 12-match sweep was improbably on the cards.

The Inters fought back valiantly, but when all was done and dusted, the Americans built enough of a cushion to retain the Cup, 16-14:

Note that a sharply focused and emotionally subdued Patrick Reed did his bit for the cause with that 4&2 triumph over CT Pan in Match 3. Dude thus salvaged a hint of pride after going 0-3 in the earlier sessions and losing his bro-in-law caddy to a dust-up with a heckler.

Ironically, for as dominant as the Americans are in President's Cup play -- 11-1-1 -- this was the first time since 2009 that they won the singles matches outright. Usually, they'd been so far ahead, it didn't matter.

Els will most certainly be back to lead the Internationals when Cup action next convenes at Quail Hollow -- just outside Charlotte -- in 2021.

As to Woods, who knows?

He definitely reveled in the adulation after hoisting the hardware.

Dude was surely aware that he almost became the second USA captain to blow it in this event, in part because Els went all tech and taut discipline on his crew, while Woods opted more for the traditional pom-pons.