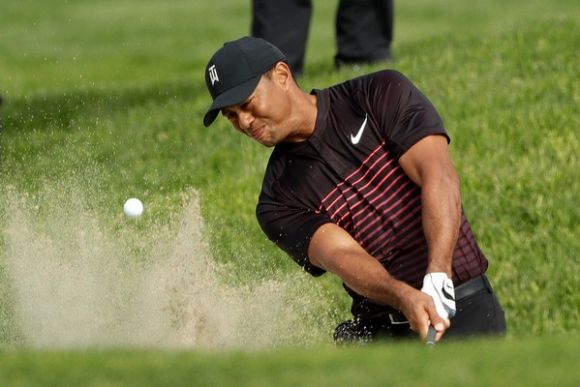 One of the most anticipated comebacks in golf history took a steady step forward when Tiger Woods completed the first two rounds of the Farmers Insurance Open with a 72-71 at Torrey Pines.

His one under par at the turn was good enough to secure tee times for the weekend, which thrilled the tourney organizers as much as Tiger's fans.

It also marked the return of another phenomenon that affects the other players.

Relegated to today's sub-headlines are:

Rahm's one of 12 players who's within five strokes of the leader. This group includes such notables as Jason Day (-7), Retief Goosen (-6), and Phil Mickelson (-6).

All have stories to tell, but none are as riveting to the public as Tiger's.

Dude curled a few putts in through the side door in today's round.

Missing those woulda been devastating -- his score sat right on the cutoff line, which is 10 strokes behind the leader -- so maybe his luck's turning the corner, too.

Torrey Pines has been good to Woods, who's won this event seven times.

This time around, he was pounding it off the tee. He just didn't know where it was going, missing the fairway on all but three holes. However, calmness prevailed, and seven up-&-downs kept him in the running.

Here's his round in context with the day's highlights:

Just making it to the weekend is huge for Woods.

The Farmer's is his first competitive step in preparing for the Masters. It woulda been a shock if his comeback didn't have a long way to go, so Tiger's early Saturday tee time will be fine with him.

No doubt, it'll be fine with the tourney organizers, too.