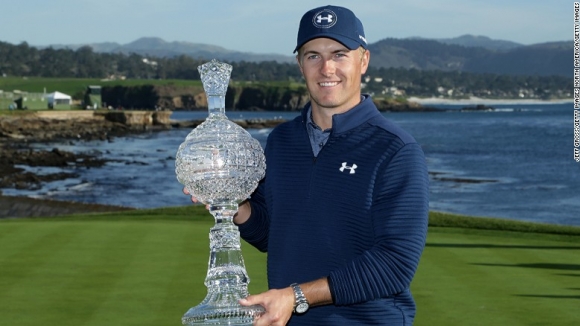 How impressive it it to be only the third golfer in history to raise nine trophies during the course of his first 100 PGA events?

Full marks to Jordan Spieth for his accomplishment after a solid, four-stroke victory at Pebble Beach.

That's a course that can intimidate players even when it's on a simulator.

Well, the other thing this course protects is par.

Anyone trying to make up ground on a leader has to hope the dude he's chasing suffers a stumble or two.

That wasn't happening with Spieth on a roll:

Spieth continued a trend in the Tour's early going, as each of the six events so far this year has been won by a golfer in his 20s:

As to the rarified air that comes with nine triumphs in 100 events, the only others to have ever accomplished it are Rory McIlroy and the Tiger hizzownself.

Pebble Beach was Spieth's 100th entry. McIlroy did it in 82.

And here's where the tragedy of Tiger Woods' fall is amplified: