McIlroy Breaks from the Pack, Claims His First Fifth Major 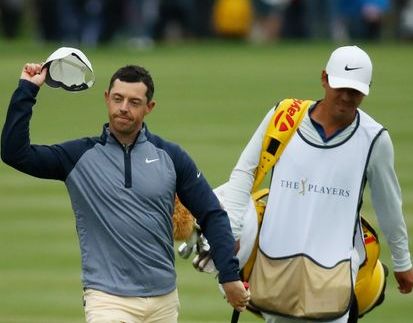 The hard fact is Rory McIlroy fired a 2-under at Sawgrass to win The Players Championship.

First of all, any red number on that course is an achievement, even for the pros.

Secondly, damn! Talk about a final round laying tracks! For instance,

High drama at what pros consider to be the fifth major, that's what.

Eight of them broke from the gate on the final round with a legitimate shot at hoisting the redesigned hardware. Mistakes on the back nine especially would be unforgivable.

Then again, who dares wins:

As if there's been a flood of Northern Ireland golfers at the TPC. Ever.

The one homeboy Ulster's got, though, navigated through his pratfalls to well and truly earn this one:

Still, the 17th at Sawgrass respects no ball as long as a human is driving it.

The best of the best have to be at their best:

Then there's Rahm, who just wouldn't take no for an answer on his club selection at the 11th hole.

It's simple to see his caddy -- who walked the course in advance and knew every blade of grass and grain of sand -- was subtly exasperated at the pushback:

After all, a looper's paycheck is dependent on his golfer's performance, which in turn, relies on an inclination to take advice from a dude who knows.

So, when this happens:

Rahm's use of the Prime Word -- they're part of his legend -- didn't make anyone feel any better, especially the caddy, whose vindication was expressed by his strolling to the drop area a few steps behind the errant Spaniard.

That was the difference between the leader going out -- Rahm -- and the winner coming in. McIlroy was able to rise above his mistakes on a course where knowing they're gonna happen rewards composure.

Gotta feel good for Furyk, too.

OG only learned at the last moment he'd made the TPC field, and his results there put him in the Top 68 and a trip to the Match Play tourney at month's end.

It never hurts to have another paycheck, and McIlroy would agree. Dude just pocketed $2.5million as well as a piece of posterity.