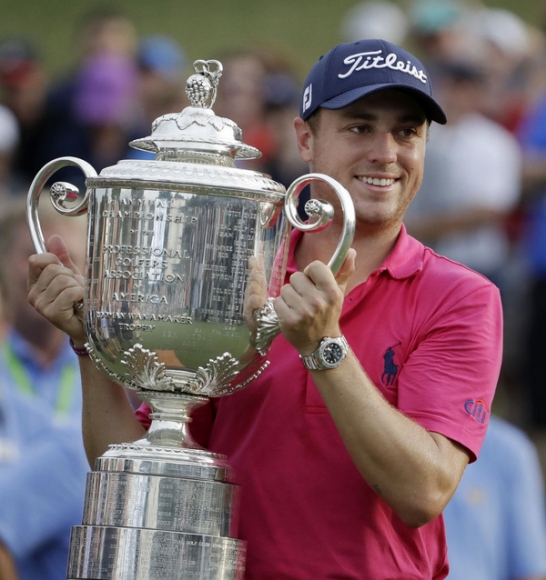 There were so many storylines going into the season's final Grand Slam event.

Justin Thomas wasn't in any of them.

In fact, he and virtually every other golfer not named Jordan Spieth who gathered at Quail Hollow in Charlotte were even upstaged by the event itself.

The PGA Championship's moving back to May.

Justin Thomas has been in danger of falling into Rickie Fowler v2.0 mode:

He was in the process of doing a Fowler-like hanging around in this one when the par-5 10th hole showed up on Sunday.

That's where Thomas bopped a tree on his drive and wound up in the fairway, ultimately finding his way to the green and this putt for a bird:

After that, the magic just kept happening.

Better than that, take this little number for another bird on the 13th hole:

Nothing else left to do but play target golf and plow through to the top of the leaderboard.

By the time Thomas got to the 18th, he had a stroke to burn.

Of course, there were other moments over the weekend.

Jon Rahm took honors for coolest shot of the day:

Finally, though, Thomas found a place in history.

Dude's joined Jack Nicklaus, Tiger Woods (twice) and Rory McIlroy as the only golfers to claim a Major by the age of 24 or under.

Now the task is to keep it going.