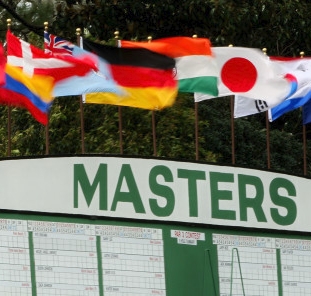 First rule of success: If you're given an advantage, take it.

As in penalty strokes, which in PGA Tour parlance, means lost dosh when the tote board hardens.

Almost as bad, the lesson came in front of an international audience, complements of The Masters.

Bob Dylan's famous for a reason. Know which way the wind blows, dude:

Yes, the ball blew back into the pond. And yes, that costs a stroke.

Horschel must've been the only links lover on the planet who didn't get the hint after Bubba Watson saw a sudden gust force his putt into a left turn earlier in the tourney:

Second rule of success: the gods owe you nothing.

In fact, Horschel may have offended them by wearing these pants at The Masters: