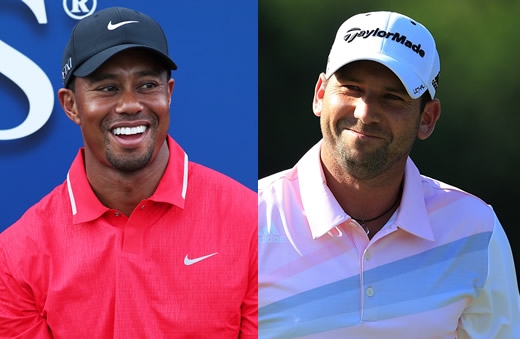 Sergio Garcia, still hurting from his embarrassing performance at The Players Championship, took time out of his busy schedule to once again blast Tiger Woods.

Although, according to Garcia, Tiger means nothing to him. You be the judge.

Garcia accused Woods of distracting him when his shot went into the woods at Sawgrass. When asked if he'd call Tiger to talk to him about it, Garcia said this:

“First of all, I don’t have his number. And secondly, I did nothing wrong and don’t have anything to say to him. And he wouldn’t pick up the phone anyway. But that’s OK; I don’t need him as a friend. I don’t need him in my life to be happy and that’s fine. It’s as simple as that. Like I have always said, I try to be as truthful as possible.

Sergio went on to basically call Woods a liar (he said Tiger hadn't told the truth in 15 years) and says he's not afraid of him, either (wherever that came from).

Is it just me, or does Sergio sound like an ex-girlfriend who has been dumped and is trying to prove to everyone that she is over him?

Garcia obviously has a problem with Woods, and rather than talk to him face-to-face like a man, he'd rather do it through the media, which makes him look like the whiny jerk that Tiger says he is. Woods may not be the nicest guy in the world, but he isn't dumb.

Keeping his mouth shut or his words to a minimum makes Woods look like the bigger man, which probably pisses Sergio off even more.